I first blogged about Terry Selection it more than a year ago when I first tried the restaurant (read it here), but after several visits I think it’s worth another review.

After several weeks of craving for Spanish food, particularly for some paella and any rustic potaje, my Dear and I had dinner at Terry Selection (see their partial menu here). Being tucked deep in the basement of Podium actually works for Terry as it feels more like a private and quiet nook instead of your usual noisy and frenetic mall restaurant. The interior has a more modern feel, which is unusual for Spanish restaurants which tend to go for traditional (or even medieval) decor. Service is efficient and professional with a bit of stoic. However, this branch does not have its own restroom and the nearest one is a bit of a walk away.
Here’s what we ordered during our last visit: 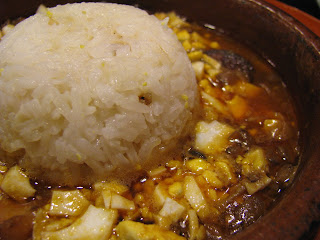 Lentejas Castellanas (P250)– a pottage (i.e., potaje) of lentils, chorizos, jamon Serrano, and hardboiled egg served with garlic rice in an oven-hot cazuela. It’s a very classic and rustic Spanish dish, something you’d expect to be served in a farmhouse restaurant. The lentils take on the strong taste of the sausages, which goes well with the bland rice. I actually did not expect it to come with rice as it wasn’t indicated in its picture on the menu, but it was ok.
Super Paella Parellada (P540, for two)– the classic Spanish saffron rice dish garnished with pork, seafood, chorizos, pimenton, mushrooms, and peas. Technically, though, this isn’t paella because it isn’t cooked in a paellera; rather, this version is cooked in a sizeable cazuela. But despite that technicality, this version of paella is quite sumptuous and is indeed good enough for two fairly sized appetites. The rice was amply infused with the flavours of the saffron and chorizo, neither bland nor overpoweringly salty. Overall a good paella and more than adequate to hit my craving. However, I have to say that my all-time favourite paella is still Mingoy’s Paella Española, which I’ve loved since grade school so there might be a little nostalgia in this statement. 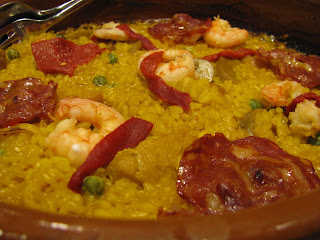 Bottomline, Terry Selection offers great food, but it ain’t cheap. Surely, there are lots of very good and less expensive places out there, but if you love Spanish food and Spanish cured meats this place is worth a visit.