It’s election season again. It is a colorful, enervating, annoying, tiring, and confusing time for every Filipino. Everyday, the news is all about candidates and campaigns and scandals and intrigues, with substantial news like campaign platforms buried or lamentably unreported.

Social media is an interesting addition to the quagmire that is election season. Its simplicity, ubiquity, and pervasiveness can add more to the noise. Every news organization utilize social media to spread the news and gather feedback. Every campaign team use social media for propaganda. And the netizen is left to his wits to sort through the mess.

Social media is best suited for propaganda. All it takes is a catchy post, a funny image, and a believable story for a propaganda item to be liked and shared. Propaganda expressed through memes are mabenta to the masa. All propagandists need is basic knowledge of social engineering to make a propaganda viral.

Unfortunately, black and negative propaganda are almost as indistinguishable as news. Yes, sometimes news are written as propaganda. That’s how hoaxes are usually written – as news. I am sure you have relatives who had unwittingly shared something that turned out to be false. Expect a lot of those during election season.

First, it is best to know that black propaganda is not as we know it.  There is a difference with black propaganda with negative propaganda ( which is sometimes known as mudslinging). When one side claims that the other side said something false and attributes it to someone, that is black propaganda. Or when a political party puts out information and ascribes it to the opposing party, with the end goal of humiliating or putting the opposite party in bad light, that’s black propaganda. For example:

There’s gray propaganda: source is unknown and accuracy is questionable. White propaganda is clearly sourced, clearly attributable to someone, and purpose is clear. This tweet is an example of gray propaganda:

I am not sure if this is news or propaganda: 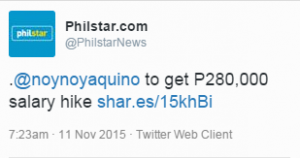 Once passed, the new salary standardization law will not benefit the incumbent elected officials.  So to say that Aquino’s getting a Php280000 increase is just plain wrong. The goal of this tweet is to either make you click the link so that you’d read the article (therefore increasing page view and hopefully will lead to earnings) or make you angry and retweet. This is what I call meme-ification of news (see The meme-ification of news). It can also be negative propaganda, but it’s up to you to decide.

Here is a good primer on different kinds of propaganda: The Difference Between Gray, White And Black Propaganda.

So, you saw something on Facebook. It’s too good to be true. So how do you check if it’s true or not?

Check who shared it. If it is shared by a news organization, it might be true. Might, because what was shared can be false, too. A social media manager is human, after all. And apparently you can manipulate the title of a news post when you share it on Facebook, like this one: 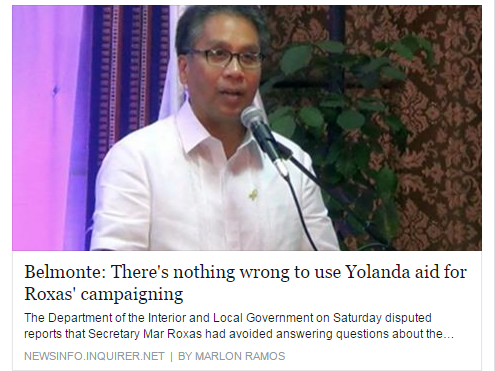 The PDI report is titled ‘Wrong to fault Mar for Yolanda housing’. When you click on that link, the title is way different. So if the post purports to be from a news org but shared by someone not connected to that news org, check and read. The above example is an obvious negative propaganda.

If it is shared by an organization, and the post makes a claim, you might have to search online for verification. For example, this one:

You can check the Senate web site to see all the bills filed by Senator Marcos. If you don’t find any bill pertaining to contractualization, then the Akbayan claim must be true.

If it is posted by a relative or friend, check if they really posted it. Did they take the photo themselves? Did they really experience what they described? Even here you have to be careful. Take this one, for example.

The problem here is that we can never verify this experience. First, he said he reported the taxi and taxi driver to LTFRB, but the LTFRB has just absolved the taxi driver and cited the Facebook user cited above in contempt (see Seaman in hot water over ‘tanim-bala’ claim on Facebook). Second, he claimed he reported the matter to the police, but he failed to state if he did by calling the hotline or going to a police station. Whether it really happened or not, we cannot tell.

So you saw one infographic/meme being shared. How to check if black propaganda or not? Check the source. Check if quote is attributed. Check if you can find the source and verify the claim yourself. If the source is dubious, or source not stated, beware.

If the source is a politician, beware. Period.

I subscribe to a simple code of ethics when I am online: THINK BEFORE YOU CLICK. I suggest all netizens to do the same. So if you found something that you want to share, think first before clicking that Share/Retweet button.